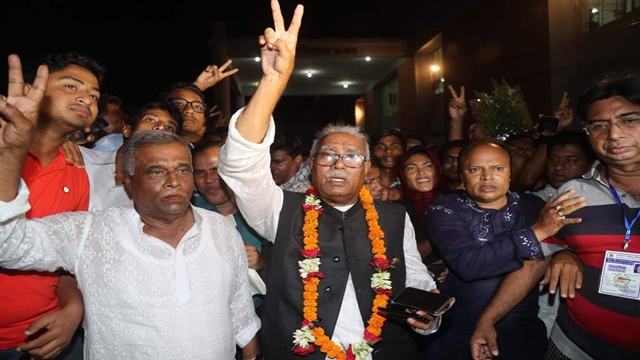 The Awami League has won the Khulna City mayoral election with its candidate Talukdar Abdul Khalek taking an unassailable lead of 65,640 votes over the BNP’s Nazrul Islam Manju as per results coming from the Election Commission.

Khalek won the election with a big margin bagging 176,902 votes while his nearest rival Nazurl Islam Manju of BNP polled 108,956 in 286 election centres out of total 289.

Before all other centres, results had come in from two polling centres where votes were cast through electronic voting machines (EVMs) for the first time on an experimental basis. Khaleque bagged 777 votes at those centres and Monju 710.

Returning officer Yunus Ali made the announcement around 9:40pm in the wee hours of Wednesday at Sonadanga Divisional Women’s Sport Complex.

Meanwhile, seeing the signs of victory with a big margin, overzealous supporters of the Awami League-backed candidate brought out a procession in the Station Road area in the metropolis around 7:10pm.

On the other hand, supporters of the BNP candidate alleged that activists of the ruling party stuffed ballot boxes with fake votes after forcing Monju’s polling agents out of the polling centres.

A total of five mayoral candidates, 148 general councillor and 38 reserved-seat female councillor candidates were there in the election race.

EC Secretary Helal Uddin Ahmed said after the voting ended that the commission was happy with ‘what it could do in Khulna’.

“The election environment was festive and nice there,” he said.