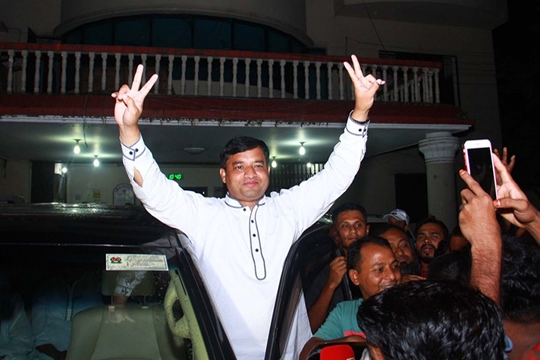 Jahangir Alam, the Awami League mayoral candidate, has won the election to become the second mayor of the Gazipur City Corporation, according to unofficial results.

Returning officer Rakib Uddin Mandol announced the unofficial results around 7:00am on Wednesday

Votes have been suspended at nine centres where there are approximately 23,000 voters. This means that the result is unlikely to change even if the BNP candidate gets the remaining votes.

The turnout of voters was said to be around 50per cent.

Besides, some 254 general councillor and 84 reserved-seat female councillor candidates were there in the race. However, a councillor has already been elected unopposed.

The BNP had won the first mayoral election in Gazipur after its formation in 2013.

Tuesday’s election was being seen as a test of popularity of the two main political parties as Bangladesh heads towards the national election.

Jahangir said he would build Gazipur as a planned city.

“I will work with everyone. My first task will be coordination. I want to bring relief to citizens’ lives by fixing the traffic problem, by repairing the roads and fixing the sewerage system. I will speak to everyone and create a master plan,” he said.

The Election Commission on Tuesday expressed satisfaction over the peaceful voting in the Gazipur City Corporation polls.

“We are satisfied as the Gazipur City Corporation polls ended in a fair manner,” Secretary of EC Secretariat Helal Uddin Ahmed told newsmen at the Agargaon Nirbachan Bhaban here.

Voting in nine centers among 425 has been postponed due to irregularities, he added.

Ahmed said the commission took steps whenever it found any allegation of irregularities.

He said the voting was completed in a festive mood.