People have no confidence in BNP: Prime Minister 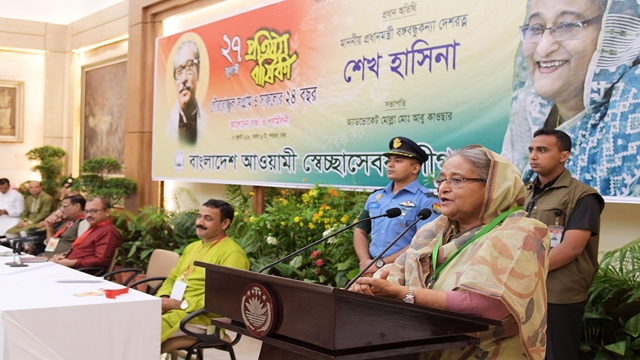 Accusing Bangladesh Nationalist Party (BNP) of harbouring terrorism and militancy and committing unbridled corruption during its misrule, Prime Minister Sheikh Hasina today (Friday) said the people have no confidence and trust in this party for its misdeeds.

“It’s proved that the country’s people have no confidence and trust in the BNP as it unleashed terrorism, killing and destructive acts, and committed unbridled corruption during its rule from 2001-2006,” she said.

The Prime Minister made the remarks when leaders and workers of Bangladesh Awami Sechchasebak League (BASL) called on her at Ganabhaban in Dhaka this morning on the occasion of its founding anniversary.

Sheikh Hasina, also the Awami League President, said the BNP leaders and workers amassed a huge amount of wealth through graft that they had used to hire a US Federal Bureau of Investigation (FBI) agent to kill Sajeeb Wazed Joy after kidnapping.

“The plot was revealed by the FBI through a probe and a BNP leader was punished for it, while the names of BNP chairperson’s adviser Mahmudur Rahman and pro-BNP intellectual Shafiq Rehman came out in the investigation,” she said.

Earlier, the leaders of Sechchasebak League greeted the Prime Minister by presenting a bouquet.