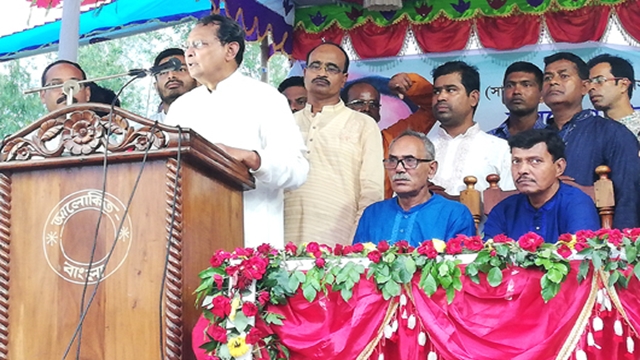 Information Minister and President of Jatiya Samajtantrik Dal (JSD) Hasanul Haque Inu has urged the leaders of Jukta Front and Jatiya Oikyo not to provide support to BNP-Jamaat clique in the next parliamentary elections as they are fire terrorists.

The information minister made the call while addressing a big public
meeting organized by JSD, Sadullapur upazila unit, on the ground of Mirpur
High School of the upazila on Friday afternoon as the chief guest.

He urged the people to give their valuable votes to Awami League led 14-
party alliance for continuing the pace of development and protecting the
country from militancy and other crimes.

Inu expressed the hope that the people of Bangladesh would foil the
conspiracies of BNP-Jamaat clique to prevent reversion to militancy.

The minister declared that JSD Science and Technology Affairs Secretary
Khademul Islam Khudi would contest the upcoming parliament election from
Sadullapur-Palashbari constituency on the party ticket.

In the meeting, the JSD chief sought votes for Khudi.