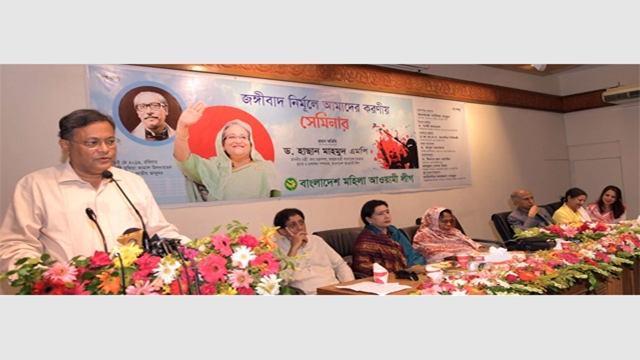 Information Minister Dr Hasan Mahmud today said country’s one of the biggest political parties, BNP, is creating barrier to eliminating militancy from Bangladesh as they are patronizing the militants.

“Sheikh Hasina’s government is combating militancy with an iron hand. But BNP always patronized militants in their own interest,” he told a seminar at an auditorium of National Museum in the city.

Bangladesh Mohila Awami League (BMAL) organized the seminar titled ‘Our Responsibility in Eliminating Militancy’ with its President Safiya Khatun in the chair.

Dr Hasan said there are many leaders of BNP-led 20-party alliance who received training in Afghanistan and their dream is to turn Bangladesh into a Taliban state.

“BNP is a close ally of the militant parties and they (BNP) are sponsoring them (militants) as their aide. BNP used the militants against their political opponents,” he said.

Giving example of the recent incident in India, the minister said Indian’s all opposition parties had stand beside the government when 40 members of armed forces were killed in militant attacks. But the scenario in Bangladesh is different, he added.

Dr Hasan, also the publicity of publication secretary of the ruling AL, said BNP raised questions through press conferences when the Awami League government took actions against the militants.

He urged BNP to cooperate the government to eliminate militancy from the country. The minister also urged the guardians, especially mothers, to look after their children.

Replying to an allegation of BNP secretary general Mirza Fakhrul Islam Alamgir on ‘Fani’, the minister said there were no big damages in the country due to the government’s proper and time-befitting initiatives.

Along with the government, Awami League and its associate bodies and different socio-cultural organizations were in the field to combat the disaster, he added.

Dr Hasan urged BNP to stand beside the common people during natural disasters without criticizing the government.