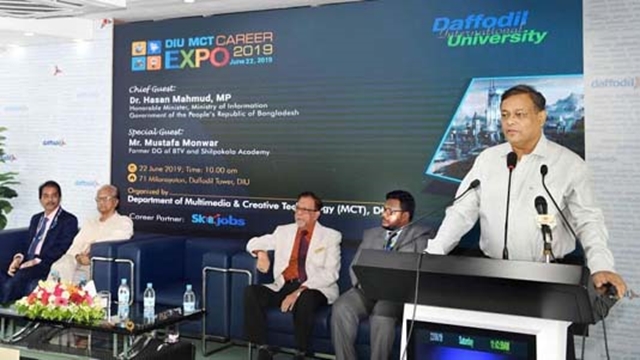 Information Minister Dr Hasan Mahmud today said the model of campaign BNP demonstrated through arson attacks in the name of ‘saving democracy’ had appeared as a major threat to the entire country.

“The countrymen had witnessed the nature of their ‘save democracy’ movement in 2013, 2014 and 2015 . . . I firmly believe they (people) will not allow them to repeat their actions,” he told reporters on the sidelines of a function he joined at the Daffodil University in Dhanmondi.

The minister said BNP was born in an “undemocratic” manner after the then army general Ziaur Rahman had usurped state power taking with him some political opportunists.

“The High Court declared Zia’s all actions ‘illegal’ in a verdict,” said Hasan, who is also ruling Awami League’s publicity and publication secretary.

Multimedia and Creative Technology (MCT) Department of the Daffodil University organised the function to mark its ‘MCT Carrier Expo-2019’.

As a matter of fact, Hasan said, BNP’s politics is established on lies and “so the people of the country don’t believe them (BNP)”.

“I firmly believe that a strong opposition is needed to save democracy. We want logic-base criticism. But, BNP always did blind criticism which is threatening as well for the democracy,” he said.

The minister said BNP activists could carryon freely all their activities as the pro-BNP lawyers staged procession but “the law enforcement agencies will take action if they try to create any anarchy in the name of movement”.

Hasan said the government either did not interfere in the cases of jailed BNP chief Begum Khaleda Zia.

“She (Khaleda) has already got bail in some cases (and) she will have to obtain her release through legal means, there is no other way,” he said.

Hasan said Begum Zia is in prison after being convicted in a graft case and her release would not be possible through street movements.

He said despite BNP’s campaign to obstruct development, “Bangladesh is moving ahead under the dynamic leadership of Prime Minister Sheikh Hasina”.

Urging students to learn how to dream, Hasan said dream is must for a human being. Otherwise none can move ahead but they must put in their efforts to realize their dreams.