People have no faith in BNP as it spreads falsehood: Qauder 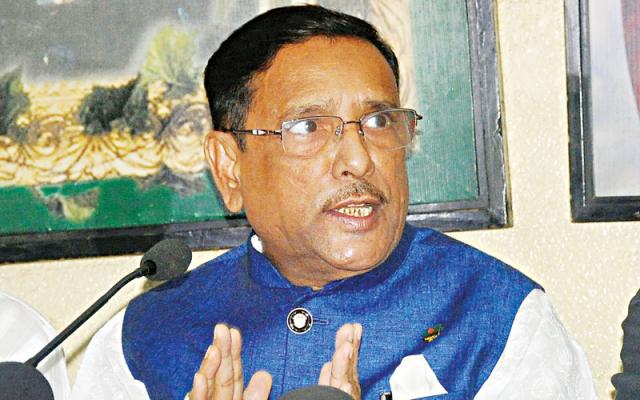 Awami League General Secretary and Road Transport and Bridges Minister Obaidul Quader today said the people have no faith in BNP as it always spreads falsehood and rumors over Khaleda Zia’s health and different other issues.

“The people have no faith in BNP as it always spreads falsehood over all issues . . . They (BNP men) are propagating falsehood and rumours from the party’s central office,” he said in a speech prior to the 25th founding anniversary rally of Awami Swechhasebok League (ASL) on Dhanmondi Bangabandhu Bhaban premises.

Comparing BNP with the liar cowboy of a popular folk tale, the AL general secretary said, “Even if BNP tells truth now, people won’t believe it. People consider them (BNP) liar when they speak about the health of BNP chairperson Begum Khaleda Zia.”

“The BNP central office is now a factory of manufacturing rumours and this party is behind the incidents of killing people in mob beating over misinformation,” he added.

The minister said BNP is hatching conspiracies at home and abroad to create an unstable situation. A quarter is also spreading rumor-panic inside the country and outside as well, he added.

“Rumours are being spread at home and abroad. The government will investigate it,” he added.

On the current flood and dengue, the minister said the government is working sincerely to tackle the prevailing dengue and flood situation.

He asked the ASL leaders and workers to strengthen their organization in a disciplined way from the grassroots level to counter all the conspiracies and rumours.

The AL general secretary suggested his party men to avail of all opportunities created by the incumbent government led by Prime Minister Sheik Hasina, daughter of Father of the nation Bangabandhu Sheikh Mujibur Rahman.

Earlier, the AL general secretary inaugurated the programme by releasing balloons and pigeons and cutting a cake.