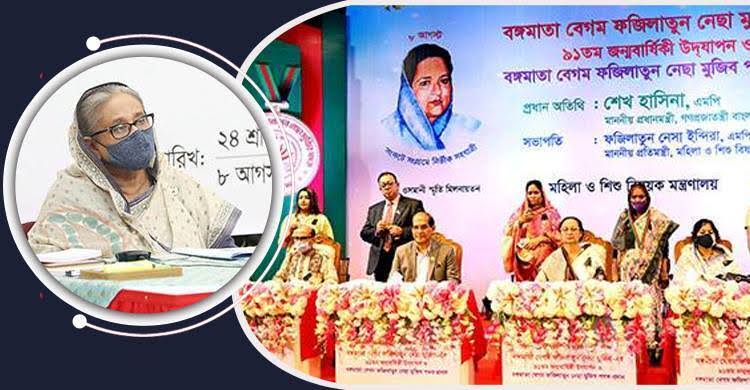 “. . . Bangamata not only managed her family, but also helped (Bangabandhu and political leaders) take time befitting exact political decisions for the country,” she said.

She also said Begum Fazilatun Nesa Mujib used to give directives and convey messages, especially to Awami League and Bangladesh Chhatra League so they were in right direction, during country’s all struggles and movements secretly whenever Bangabandhu was in jail.

The Premier was addressing the Bangamata Fazilatun Nesa Mujib Padak-2021 distribution ceremony as the chief guest at Osmani Memorial Auditorium, joining virtually from her official residence Ganabhaban. Office of the Deputy Commissioner, Gopalganj was also connected.

The Ministry of Women and Children Affairs organized the function, marking the birth anniversary of the majestic woman and better half of Father of the Nation Bangabandhu Sheikh Mujibur Rahman.

Sheikh Hasina, elder daughter of Bangamata Begum Fazilatun Nesa Mujib, said, “My mother had devoted and sacrificed her entire life for the ideology for which my father (Bangabandhu) had got involved in politics.”

The Prime Minister continued: “She [Bangamata] had no ambition to become a political leader and no aspiration for wealth . . . she developed her life in such a way.”

With State Minister for Women and Children Affairs Fazilatun Nessa Indira in the chair, secretary of the ministry Md. Sayedul Islam delivered welcome address at the ceremony.

A total of five women were given the Padak (Award) for their outstanding contributions to their respective categories such as Independence and War of Liberation, education, culture and sports, agriculture and rural development, politics and research.

Professor Mamtaz Begum (Posthumous), a valiant freedom fighter of Brahmanbaria, was given this Padak for her contribution to Independence and War of Liberation, while Jaya Pati (Posthumous) from Tangail in education, culture and sports, Mosammad Nurunnahar Begum, an agro-entrepreneur from Pabna, in agriculture and rural development, valiant freedom fighter Principal Jobeda Khatun Parul from Cumilla in politics and Nadira Jahan (Surma Zahid), a writer and researcher from Netrakona, in research.

Each awardee received a medal made of 40 gm of 18-carat gold, a cheque of Taka 4 lakh and a certificate of honour.

On behalf of Prime Minister Sheikh Hasina, the State Minister for Women and Children Affairs handed over the first ever introduced Padak to the recipients, which is also the highest state honor for women in the country.

Besides, Principal Jobeda Khatun Parul spoke at the ceremony expressing feelings on behalf of the Padak recipients.

A documentary on the life and works of Bangamata Begum Fazilatun Nesa Mujib was also screened.

To mark the auspicious day, Prime Minister Sheikh Hasina inaugurated the distribution of cash support to the insolvent women at the Office of Deputy Commissioner, Gopalganj.

Some 2,000 women would receive Taka 2,000 each through mobile financial service provider Nagad.