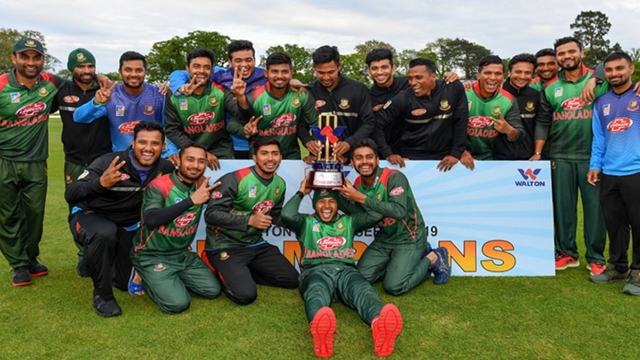 Blistering half-centuries by Soumya Sarkar and Mosaddek Hossain have propelled Bangladesh to their first-ever ODI tournament title in a nerve-jangling chase against the West Indies.

It was the seventh time lucky for the Tigers who had failed in their six previous tries to win a tournament.

Mosaddek’s unbeaten 52 off 24 balls after 41-ball 66 by Soumya helped Bangladesh hunt down the target of 210 in some style with seven balls and five wickets to spare in the rain-shortened final of the tri-nation series in Ireland on Friday.

The victory has etched May 17 in Bangladesh’s cricket history as well, because the Tigers tasted their first ODI win, against Kenya in India, on this day in 1998.

In Dublin, Soumya started the pursuit with some crisp shots as Tamim Iqbal looked to get set on the wicket. It meant his partner took most of the strikes.

West Indies pegged Bangladesh back when Shannon Gabriel sent back Tamim (18 off 13) and Sabbir Rahman for a duck in the same over.

Unfazed by the loss of quick wickets, Soumya found the boundary regularly as he partnered with Mushfiqur Rahim in a 49-run stand,

The partnership broke when Soumya, who used the pace on the ball off Gabriel and Kemar Roach, finally fell as West Indies brought Raymon Reifer to get wickets.

The Tigers found themselves in a tight spot again after losing three quick wickets as Reifer also trapped Mushfiqur in front after his cameo of 22-ball 36 two overs later and Mohammad Mithun was out to a slider by Fabian Allen after another two overs.

Having won all the previous matches of the series, except a rained-out tie against Ireland, Bangladesh finally had Mosaddek, who came in for injured Shakib Al Hasan, to the rescue.

In keeping the required rate in check, Mosaddek took 20 balls to smash the fastest ODI half century by any Bangladeshi batsman with five sixes and two boundaries while Mahmudullah kept the wickets from falling at the other end.

The match hung in the balance until Mosaddek hit three sixes and a boundary in the 22nd over of Allen after one six apiece off Jason Holder and Roach to make Bangladesh requiring 27 off the last three overs.

Earlier in the day, West Indies made 152 for 1 in the 24-overs-a-side match after rains halted play with the team 131 for no loss in 20.1 overs, but the target for Bangladesh became steep as DLS came into play.

Bangladesh skipper Mashrafe Bin Mortaza’s decision to bowl first in a bid to make the most of the overcast conditions did not pay off with the bowlers failing to make inroads into the Caribbean batting.

Openers Shai Hope and Sunil Ambris reached their fifties in quick time to propel their team into a strong position.

But when the play resumed, Mustafizur Rahman and Mehidy Hasan Miraz were able to contain the Windies pair, giving only 21 runs off the remaining 23 balls.

Hope made 74 off 64 with six fours and three sixes and left with eight more balls to go.

Mosaddek took the catch at long on when the West Indies batsman tried to slog a Miraz delivery over midwicket.