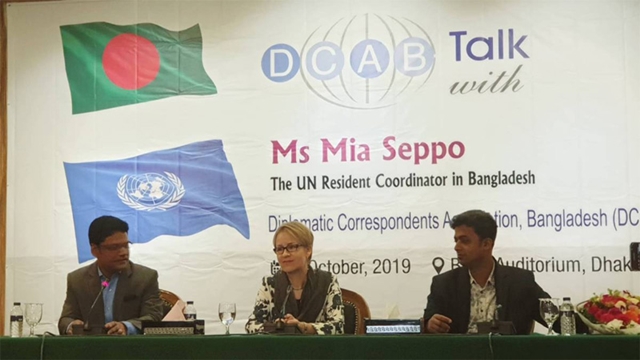 She recognised the contributions of those who helped achieve this remarkable feat.

Mia Seppo was addressing a programme - DCAB Talk - at BIISS auditorium in the city with President of Diplomatic Correspondents Association, Bangladesh (DCAB) Raheed Ejaz in the chair. The DCAB general secretary also spoke there.

The UNRC highlighted the challenges that need to be addressed to help the country achieve the next level of development.

Regarding Rohingya issue, she said any solution to the crisis has to be a "sustainable" one.

She said the root of the crisis is in Myanmar and the solution also lies there.

Later, she condemned the killing of Abrar Fahad, a student of Bangladesh University of Engineering and Technology (BUET), and called upon the authorities to investigate and bring the perpetrators to justice in a speedy manner.

"We are very shocked and saddened by the incidents that took place in BUET. We called upon the authorities to investigate and bring the perpetrators to justice. A statement has already been issued from UN in this regard,” Mia Seppo says.

Abrar, a second-year student of Electrical and Electronic Engineering department of Buet, died after he was beaten allegedly by some Chhatra League men brutally at a dormitory of the university between 7:00 pm Sunday and 2:30 am on Monday.

The incident triggered a firestorm of protests on campuses across the country. Many took to social media to demand justice for Abrar.

Law enforcers suspect, Abrar was attacked because of one of his recent Facebook posts, which seemed to be critical of some recent deals with India.