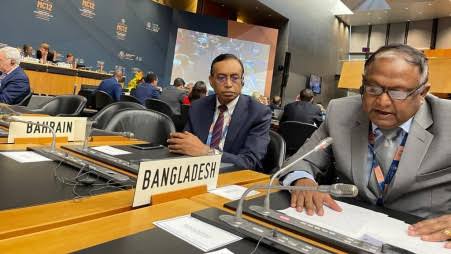 Bangladesh and other Least Developed Countries (LDCs) joined voices at the WTO ministerial conference to demand some "new international support measures" in the trade regime for salvaging their pandemic-battered economies.

The issues coming under priority list from the least-developed countries or LDCs include keeping uninterrupted supply of food by avoiding export-import bans and extension of Trade-Related Aspects of Intellectual Property Rights (TRIPS) waiver for pharmaceuticals.

Bangladesh urged the global leaders to allow it to enjoy the trade benefit under TRIPs after the country's graduation to a non-LDC status.

In a meeting at the 12th Ministerial Conference (MC12) of the World Trade Organization (WTO) in this Swiss city (Geneva), Bangladesh along with the other LDC-graduating countries placed the demand Monday as the trade ministers continued brainstorming over state of trade and commerce in the post-pandemic period.

The meeting on 'WTO response to the pandemic, including TRIPS waiver' also discussed food-security issues to keep uninterrupted flow of food supply during the lingering pandemic.

Commerce Minister Tipu Munshi, after attending the meet, said Bangladesh and other LDCs sought patent waiver under TRIPS until 2033, but it should be extended at least up to 2029.

"We need to get it extended beyond 2026 (the graduation year) as it is a need for pharmaceutical industries," he told reporters.

The minister expressed optimism about extension of the benefit after 2026 when Bangladesh would graduate from the world's poor-country club.

"Prices of food are going up so ban or any type of restrictions should not be imposed on it as nutrition is also related to it, too," he said.

Extension for international market access, TRIPS waiver, aid for trade, and technology support for specific period are imperative, he said.

"The LDCs also proposed creating a fund for supporting graduation to make it sustainable," he said.

The economist points out that there are some highly indebted LDCs that also need to be bailed out.

"Production of pharmaceuticals without patent licence is valid for Bangladesh but the products cannot be exported," he notes about the paradoxical trade regime.

Federation of Bangladesh Chambers of Commerce and Industry (FBCCI) president Md. Jashim Uddin said the private sector of Bangladesh also wants an extension of the TRIPs waiver for the growth of the medicine industry in the country.

Meanwhile, the ministers and senior officials participating in the MC12 on Monday put in a hectic effort to reach a compromise to lift intellectual property rights on Covid-19 vaccines.

The patent waiver is a critical agenda in the meeting where developed and developing countries are still sharply divided over trade issues of the crunch time when normal orders have been upended by the pandemic.

Critics claim that the draft text falls far short of what is needed, by time-limiting and complicating the vaccine-patent waiver. They argue that the text left out Covid treatments and diagnostics.

It was in October 2020 when India and South Africa started pushing for the WTO to waive IP rights on Covid-19 vaccines, tests and treatments so that poor nations get more equitable access.

After a number of talks, the United States, the European Union, India and South Africa reached a compromise which is the basis of the draft text. If agreed by all the members, most of the developing countries, excluding China, will be allowed to produce Covid vaccines without authorisation from patent holders.

Again, in an open letter to the ministers participating in the MC12, Michelle Bachelet, UN High Commissioner for Human Rights, and Rebeca Grynspan, Secretary-General of the United Nations Conference on Trade and Development (UNCTAD), Monday extended support to the LDCs' demand on ensuring food security.

The letter urges focus on coherent multilateral policy and action to achieve food security in the world.

They urge the ministers to address the need of the Least Developed Countries (LDCs) and Net Food Importing Developing Countries (NFIDs) to increase their resilience to possible food-supply shocks.

In this connection, the open letter stresses allowing measures that may include input and investment subsidies, access to land, natural resources, seeds, credit, technology and markets to small-scale farmers and resource-poor food producers to bolster their agricultural production.

Earlier on June 9, Egypt on behalf of the Arab, African and LDC Groups submitted a communication urging WTO members not to challenge measures taken by the LDCs and NFIDCs for the sake of food security.

Currently, any measure that appeared trade-distortive is subject to legal challenge through the WTO Dispute Settlement Mechanism.

The communication also demanded that this should enter into force the day following the conclusion of the MC12 and shall remain in force for a period of four years.

The MC12 will conclude on Wednesday.