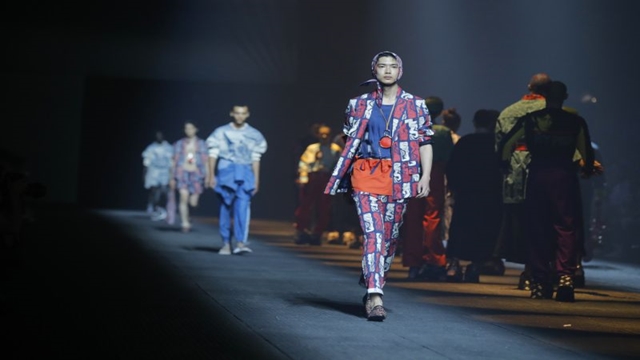 It was quite literally the final curtain for Kenzo's Carol Lim and Humberto Leon at Paris Fashion Week on Sunday, after the duo's eight successful years at the creative helm of the house came to a close.

With a 100-meter (110-yard) curtain on set, a surprise performance by singer Solange and thousands of guests in attendance, the duo's departure was a farewell to remember.

Here are some highlights from the final day of spring-summer 2020 men's and co-ed collections from the Kenzo show and others by Lanvin and Paul Smith.

For their final show, Leon and Lim went back to the homeland of house founder Kenzo Takada: Japan and its legendary seas.

More specifically, they paid homage to the Ama, a dying community of aging Japanese females who free dive into their late 70s.

"For over 2000 years (they) have dived to the ocean floor to forage for seafood such as shrimp, urchins or even pearls... They have become known as the last mermaids," Leon said.

A loose-fitting blue suit had a wrinkled look and white markings that suggested it had been dried on the sand and bleached in the sun. It was a beautiful piece.

In the co-ed show, the female models sported floor-length hairpieces while wearing anything from swimsuit hybrids and Japanese Okobo sandals in sea-lily print, to a silver dress that had segmented pieces around the bust to resemble shells.

Typical of Leon and Lim, the mermaid look was capped contradictorily by blue jeans and sneakers.

Still, it felt as if many of the exhaustive 74 designs had been seen before.

A large seascape-covered curtain served as a powerful element in the show.

The monumental installation by photographer Yamazaki Hiroshi charted the sun's course over the ocean using a long exposure lens.

The visual metaphor for the passing of time had guests spellbound and called attention to the end of an era for the duo of American designers who've made a deep mark on the Paris fashion industry.

Loud bass music reverberated around the warehouse venue before the curtain was sucked up into the roof in a split second, as if by magic. The audience gasped.

The surreal air defined the entire presentation, as dancers moved by bending forward and back on Japanese "geta" clogs.

Solange, wearing alien-like beaded jewelry, appeared out of the darkness while conducting a brass band. She then sang "a capella" on the catwalk to raucous whoops.

LANVIN IS NAUTICAL BUT NICE

Given that the former Loewe staffer is the storied house's fourth designer in four years, there are lots of hopes pinned on him to rescue the world's oldest continually running couture maison from the creative wilderness.

Channeling styles that might be described as "sailor punk," Sialelli did just that — rising to the challenge with a show that overflowed with clever ideas.

Rich color — which seems to be Sialelli's touchstone thus far — was used with panache in a carefully stage-managed set that featured men's and women's designs. The pale blue swimming pool doors and multicolor wall mosaics were visible in the background.

A saffron hoodie accompanied a pair of baggy indigo waterproof pants. A duffel coat was fashioned in Air Force blue. And a white sailor's collar looked like a large, almost diagonal lapel in the Asian style.

Elsewhere, the collection was just plain fun, with a boat print on what resembled a silvery loose pajama.

The ultra-wide shoulders that defined London in the late 1970s were the focus of British fashion icon Paul Smith, who used the exaggerated style in a pared-down collection.

High, retro-looking buttons on a suit jacket also stood out, as did oversized pockets that looked like a separate layer of clothing.

Smith is a master colorist.

An ochre coat with crimson lining had perhaps the most sumptuous color combination seen this season.

The one-time provocateur Hedi Slimane continued in his more toned-down direction at Celine this season in his second menswear showing.

The signature shaggy-haired models this spring raided the wardrobe of the 1970s. Delivered in fine and neat silhouettes, denim jackets, flared jeans, black leathers pants mixed up with a black shimmering tuxedo, flower brooches and a retro military jacket with epaulettes and gold buttons.

A donkey brown check teachers-style suit jacket, meanwhile, came with shirt and tie to provide a touch of humor, while a glistening snake jacket provided a touch of spice.

But the colors were generally muted, as was the collection as the whole.

Arnault's arch-rival Francois-Henri Pinault, CEO of Kering, used to sit in the same place when Slimane designed for Saint Laurent.