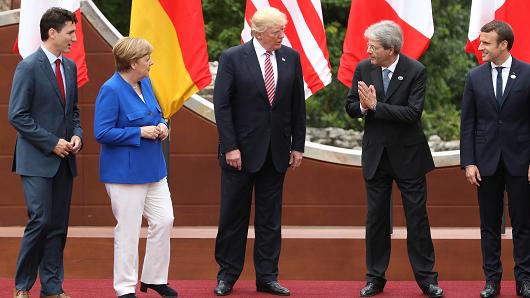 He said that other countries were imposing "massive tariffs" on the US.

The joint communique, advocating a "rules-based trading system", was reached despite tension over US tariffs on steel and aluminium imports.

Speaking at a news conference, he described as "insulting" Mr Trump's decision to invoke national security concerns to justify steel and aluminium tariffs.

"It would be with regret but it would be with absolute clarity and firmness that we move forward with retaliatory measures on 1 July," Mr Trudeau said. "Canadians are polite and reasonable but we will also not be pushed around."

His words contained nothing he had not said before, both in public and in private conversations with Mr Trump, his office said later.

The EU said it would stick to the joint communique despite Mr Trump's decision.

"We stand by the commitments made in the G7 communique," a senior UK government source said.

Tweeting en route to his next summit in Singapore, Mr Trump said he had instructed US officials "not to endorse the communique as we look at tariffs on automobiles".

He said the move was based on Mr Trudeau's "false statements at his news conference, and the fact that Canada is charging massive tariffs to our US farmers, workers and companies".

He suggested Mr Trudeau was "very dishonest and weak".

Mr Trump had earlier signed the joint statement agreed by all the G7 nations despite the trade row.

He also tweeted defiantly about not allowing "other countries to impose massive tariffs and trade barriers on its farmers, workers and companies".

Until just a few weeks ago, the relationship between Mr Trump and Mr Trudeau could have been called cordial. Despite differences between the two countries over trade - from tiffs over everything from softwood lumber and newsprint to the major renegotiation of the trilateral North American Free Trade Agreement - the two men tended to speak positively about each other.

The recent US decision to impose metals tariffs on Canada, the EU, and Mexico was a turning point. Mr Trudeau, who had taken a conciliatory approach towards Mr Trump, began using a much harsher tone. Polls indicate Canadians support the tougher tone.

The fact remains that the two countries' economies are deeply integrated, with jobs on both sides of the border counting on smooth trade between the neighbouring nations.

Whether or not this new phase in the Canada-US relationship will allow some of the trade sticking points to be resolved is still to be seen.

What is in the joint communique?

Media captionTrump insists relationships with other G7 leaders are "outstanding"

In the communique, the group of major industrial nations - Canada, the US, the UK, France, Italy, Japan and Germany - agreed on the need for "free, fair, and mutually beneficial trade" and the importance of fighting protectionism.

Other agreements reached include:

What else did Trump have to say?

President Trump earlier told reporters he had proposed the idea of a tariff-free G7 to other leaders and described his talks with them as "extremely productive".

"The United States has been taken advantage of for decades and decades," he continued, describing America as a "piggy bank that everyone keeps robbing".

President Trump said retaliation tariffs from his allies were a "mistake" and warned that if it got as far as a trade war, then the US would "win that war a thousand times out of a thousand".

He left the summit early to travel to Singapore for a landmark meeting with the North Korean leader Kim Jong-un to try to persuade him to give up the country's nuclear weapons.

What are the tariffs?

On 1 June, the US imposed a 25 per cent tariff for steel and 10 per cent for aluminium on imports from the EU, Canada, and Mexico. Mr Trump said the move would protect domestic producers that were vital to US security.

The EU then announced tariffs on US goods ranging from Harley-Davidson motorcycles to bourbon. Canada and Mexico are also taking action in retaliation.

It is an annual summit bringing together Canada, the US, the UK, France, Italy, Japan and Germany, which represent more than 60 per cent of global net worth between them.

Economics tops the agenda, although the meetings now always branch off to cover major global issues.

Russia was suspended from the group in 2014 because of its annexation of Crimea from Ukraine. On Friday, Mr Trump made a surprise call for Moscow to be readmitted but German Chancellor Angela Merkel said other members were against the idea.