Perpetrators of crimes against Rohingyas must face justice: Blake 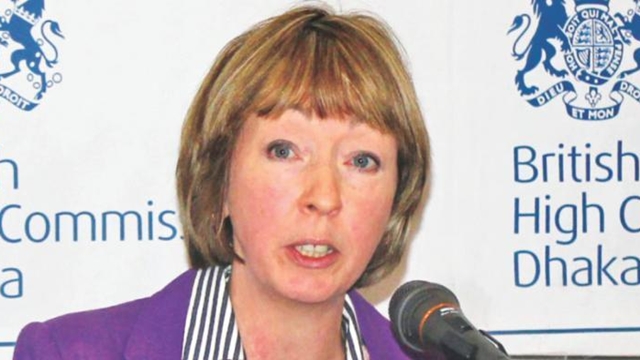 British High Commissioner in Dhaka Alison Blake on Tuesday said that perpetrators of atrocities in Myanmar's Rakhine state must be accountable for their crimes as Rohingyas deserved justice being victims of the mayhem.

"They (perpetrators) must be accountable for the crimes have been committed . . . the Rohingys deserve justice," she said while speaking at DCAB Talks, a flagship programme of Diplomatic Correspondents Association Bangladesh at Jatiya Press Club yesterday afternoon.

The British envoy simultaneously extended her country's support to Bangladesh's insistence for safe, voluntary, dignified and sustainable return of the over a million Rohingys to their homeland in Myanmar as they now languished in makeshift camps in Cox's Bazar fleeting their home to evade the carnage.

Blake highly commended Dhaka's generous response to the Rohingys crisis and reassured Bangladesh of UK's continued commitment to keep the international spotlight on the issue to support its humanitarian response and for their safe, voluntary and sustainable return.

UN counted some 700,000 Rohingys to have taken refuge in Bangladesh since Myanmar army launched a crackdown on their ethnic minority community on August 25 last year, which it described as a textbook example of ethnic cleansing.

Blake, however, evaded direct answers to some questions on Bangladesh's election issues for being its internal political affairs but said her country believed in inclusive, participatory, free and fair elections.

"We will not interfere in the internal political affairs of Bangladesh and so you won't find me speculating about the politics or election outcomes," she said.

The envoy, however, referred to British Foreign Secretary Boris Johnson's comments during his Dhaka visit in February when he stressed the importance of free and fair elections, a free media and affording political space to the opposition as he met Prime Minister Sheikh Hasina and Foreign Minister AH Mahmood Ali.

"But as one commonwealth partner to another, the UK, together with our international partners - the Commonwealth, EU and others - will continue to encourage a peaceful way forward, and encourage dialogue between all political parties in Bangladesh to resolve any differences," she said.

Blake also expressed the hope that the next general election would be held in a free, fair and peaceful manner with the very existence of peaceful political situation ahead of the polls.

"We are very much hopeful that the people of Bangladesh have their choice . . . and a free and fair election would be held," she said adding that Britain always valued democracy, freedom of expression and human rights.

The envoy congratulated Bangladesh on meeting the criteria for graduating from the status of Least Developing Country (LDC) to a developing one and pledged UK's continued support to this South Asian nation on its journey to full graduation in 2024.

"Our aim is to bring the British trade and private sector development and investment that are the engine for sustained economic growth, here in Bangladesh as well as the UK," she said.