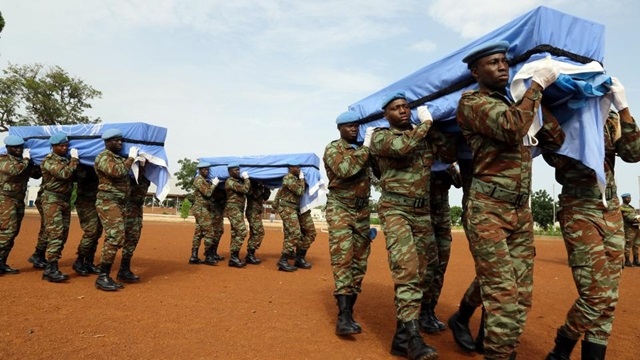 United Nations officials in Mali have paid tributes to four deceased Bangladeshi peacekeepers, who were killed in the line of duty on February 28.

The Special Representative of the United Nations Secretary-General (SRSG) Mahamat Saleh Annadif and the MINUSMA Force Commander General Jean-Paul Deconinck were present at the ceremony held at the MINUSMA Operational Base in Bamako on Tuesday.

Earlier in the week, the two senior officials visited the Bangladeshi base in Gao to express in person their condolences to the fallen peacekeepers colleagues and to assure them of their full support, said a press release on Wednesday.

Four Bangladeshi U.N. peacekeepers were killed by a roadside bomb in central Mali on Wednesday.

The incident occurred in the central Mopti region, where attacks by Islamist militants have surged in recent months, although U.N. officials did not say who was responsible for the blast.

Six Malian soldiers were killed nearby a day earlier when their vehicle struck a landmine.

“The Secretary-General conveys his condolences to the Governments of Bangladesh and Mali and his profound sympathies to the families and loved ones of the victims,” a spokesman for U.N. Secretary-General Antonio Guterres said in a statement.

Bangladesh is the world’s second-biggest contributor to U.N. peacekeeping operations with some 7,000 uniformed personnel deployed to missions around the world.