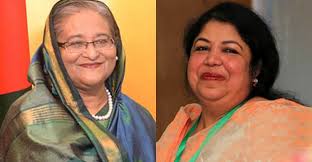 Speaker of the Jatiya Sangsad Dr. Shirin Sharmin Chaudhury said on Monday the name and image of Bangladesh have been glorified in the international arena because of Prime Minister Sheikh Hasina’s political wisdom, courageousness, dynamic and farsighted leadership.

“Bangladesh has been acclaimed as a role model of development and the country’s image has been brightened in the international arena for time befitting and visionary leadership of the prime minister Sheikh Hasina”, she said.

Highlighting many creditable works and achievements of prime minister Sheikh Hasina , the speaker said Sheikh Hasina has already turned her vision ‘Digital Bangladesh’ into reality and continued striving hard to build up the country as ‘Sonar Bangla’ as dreamt by father of the nation Bangabandhu Sheikh Mujibur Rahman.

The speaker of the Jatiya Sangsad stated this while addressing as chief guest at a virtual meeting at the conference room of Sheikh Hasina University, Netrokona to mark the 74th birthday of prime minister Sheikh Hasina.

Chaired by Vice Chancellor of the university Dr. Rafiqullah Khan, the meeting was addressed, among others, by State Minister For Social Welfare and renowned freedom fighter Ashraf Ali Khan Khasru Mp, Chairman of the board of directors of Biman Bangladesh Air Lines Sazzadul Hasan and Treasurer of the university Dr. Subrota Aditya.