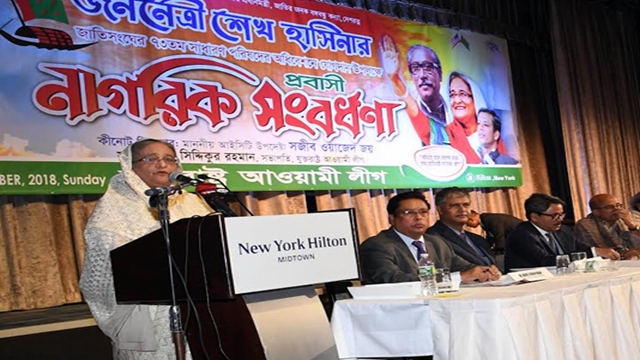 Prime Minister Sheikh Hasina has said the killers, money-launderers and interest-takers became united against the Awami League government and feared the country will be destroyed if they could come to power.

“These characters will plunder national wealth, destroy the country and
become cohorts of the anti-liberation forces if they come to power. So the
people will have to think about them,” she told a civic reception hosted in
her honour by expatriates Bangladeshis living in the USA.

The premier harshly criticized the formation of a new anti-government
alliance led by Dr Kamal Hossain and Dr Badruddoza Chowdhury and wondered how
they will fight corruption keeping corrupts elements along with them.

“Khaleda Zia and Tarique Rahman were convicted in corruption charges and
we’ve brought back the money they siphoned off abroad. Now Dr Kamal Hossain,
Badruddoza Chowdhury and Mahmudur Rahman Manna will fight the graft taking
these corrupt elements with them,” she said.

She wondered that former caretaker government adviser Barrister Moinul
Hosein and BNP leader Barrister Moudud Ahmed too lent their support to the
new alliance and recalled that both were convicted previously in graft
charges.

The premier said Moinul Hosein was convicted in the Sazu Hossain versus
the state case for grabbing of a house in city’s Kakrail area and Moudud
Ahmed was convicted in a graft case but military dictator H M Ershad pardoned
him and subsequently inducted him in his regime.

Sheikh Hasina also expressed her skepticism about Kamal Hossain and
Badruddoza Chowdhury’s leadership and feared that the country would be
exposed to plunderers and looters.

She recalled that Hossain appeared failure in running his own party that
he formed quitting Awami League while Chowdhury was forced to quit presidency
and subsequently “had to run along the railway tracks being chased by the BNP
activists”.

Another figure of the new alliance Manna, she said, was elected DUCSU
vice-president as he was in good book of General Zia and Ershad.

“(Yet) I want them to form a party and contest the polls . . . if they get
peoples mandate they will come to power but I thank them as at least they got
united at one place,” she said.

But the premier said their call for toppling the government appeared weird
saying “what is the fault of the government (when) no sector remained
undeveloped” as the incumbent government ran the country.

She simultaneously said BNP-Jamaat terrorists killed 500 innocent people
and 28/29 members of law enforcement agencies through clandestine arson
attack in 2013-2015 forcing the government to take steps to expose them to
justice.

“Cases were filed against the BNP-Jamaat cadres all over the country for
their heinous acts and when the law enforcement agencies round them up, their
legal actions are described as political cases,” she said.

The premier added: “These are not political cases, rather these are murder
cases . . . they are being arrested for killing people through ‘fire
terrorism'”.

Sheikh Hasina her government was still working relentlessly for the
peoples and country’s welfare that yielded launching of the construction of
mega projects like the Padma Bridge which “we are constructing with our own
funding as the honesty is our biggest strength”.

“The power is not a thing of enjoyment to me, rather I see it’s the
instrument to serve the people . . . If the people want me we will remain in
government, otherwise not,” she said.

Turning to the discussions and criticism on newly enacted Digital Security
Act, the prime minister said everybody was now using digital devices like
mobile phones, laptops and tabs and the technology has “both good and bad
sides”.

“To stop misuse of the (digital) technology, we passed Digital Security
Act,” she said.

Sheikh Hasina said the journalists were spearheading a massive campaign
against the act “but I want to clearly say that they are seeing their own
interest, paying no attention to the social problems being created with the
misuse of the digital devices”. Sheikh Hasina pointed out that the devises
were used to spearhead false propaganda of vested quarters which was clearly
visible during the recent student movement.

The premier said the number of newspapers now being published in the
country were highest ever as the government policy was to facilitate freedom
of expressions and “the private TV channels that are running in the country
also were granted licenses by the incumbent government.

Highlighting the country’s tremendous development that took place in the
last 10 years, the Awami League president urged the people to cast vote for
the party in the next election to keep up the uplift.