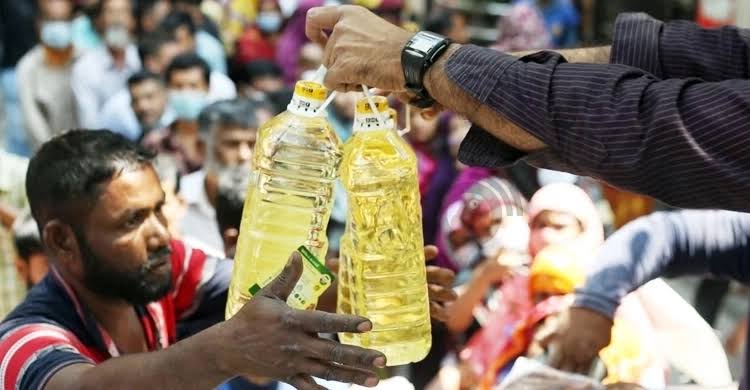 The state-run Trading Corporation of Bangladesh (TCB) has a plan to start selling edible oil nationalwide at subsidised price from June.

"We have a plan to start selling of edible oil at subsidized rate across the country from June," said TCB Chairman Brigadier General Mohammad Ariful Hasan.

He said the programme will tentatively start from the middle of June and it will continue till before the Eid-ul Azha.

Around one crore families throughout the country including around 13 lakh from the capital are now being enlisted to get the facilities.

Along with the oil, the recognized lower income families also will get pulse and sugar at subsidized rates, but the fresh price of the essential commodities is yet to be fixed by the government.

Ariful hoped that some five crore people would be benefitted once such products are provided to around one crore families.

He informed that a list has already been prepared for one crore families to offer such facilities.

After the Ramadan, the TCB had taken a pause in running its regular selling programme until completing the listing process of the real beneficiaries across the country.

The TCB chief, however, specified that the edible oil import process is now underway by the TCB from abroad, adding that "We have started negotiation with different companies abroad to import edible oil under government-to-government arrangement."

Apart from this, "we have brought quantity of edible oil from South Africa under bidding tender and it will reach soon the country," the TCB chief added.

The TCB, however, could not confirmed the unit price of the edible oil which would be sold from the next month, but a commerce ministry official hinted that the selling price of per litre edible oil likely would be Tk 110.

The government has taken a plan to import edible oil directly through the TCB. To this end, Bangladesh missions abroad have already been contacted for procuring edible oil through the state-run corporation, confirmed by a commerce ministry official.

The government is trying to ensure supply of the edible oil at lower price since the whole world witnessed a price hike of crude edible oil recently.

Earlier, Bangladesh Vegetable Oil Refiners and Vanaspati Manufacturers Association increased the price of bottled soybean oil by Tk 38 a litre to Tk 198 per litre on May 5.

It also fixed the price of loose or unpackaged soybean oil at Tk 180 per litre with a hike of Tk 44 per litre.