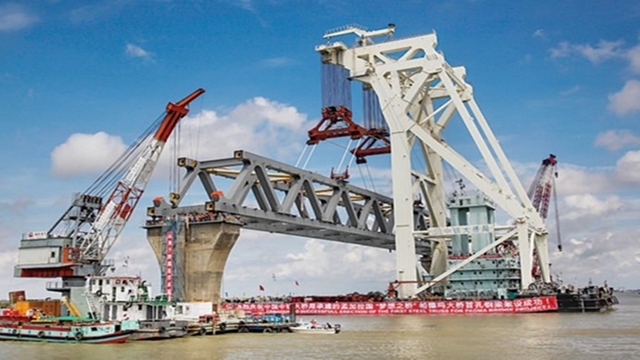 The project-execution agency seeks a pared-down Tk 43.95-billion fund from the government in the upcoming budget for the Padma Multipurpose Bridge as construction work decelerated, sources said.

At the present rate of going -- reportedly slowed by riverbed adversities -- the builders could miss the December 2018 construction deadline, they presumed.

Officials said Wednesday the Bridges Division sought the lower amount of annual allocation from the aggregate fund due to slow progress in the construction works.

And the amount sought in the upcoming budget is Tk 5.08 billion lower than Tk 47.03-billion outlay for the bridge in the current (FY2017-18) revised Annual Development Programme (RADP).

The project tenure for building Bangladesh's largest 6.15-kilometre dream-bridge is due to be over by this coming December probably before completion of the works.

Project-insiders said since the builders are likely to trail behind the schedule for building the bridge, the Bangladesh Bridge Authority (BBA) under the Bridges Division has sought the lower funds in the upcoming development budget.

A Planning Commission (PC) official said if the BBA wants to complete the bridge within its tenure, until December, it would have to spend Tk 90.61 billion in the first half of the next fiscal year (FY2019).

"There are some troubles they have been facing over the last few months on some piling sites in the Padma River. We will not require entire money from the remaining funds of the total project cost in the next fiscal as we will fall short of target from the earmarked project work in this year. So, we have sought the lower funds in the upcoming ADP," said a senior Bridge Division official.

The project-insiders said the BBA is facing difficulties in its test piling at nearly half of the piers out of total 42 in the might river as it is not getting hard soil on the riverbed and in the depth of the riverbed.

The PC official said they recently received the lower fund requirements from the Bridge Division for the ongoing Padma Bridge project in the under-preparation ADP. "We are scrutinising the requirements before finalisation of the ADP."

The fund demand is likely to be reflected in the upcoming ADP, likely to be finalised by June this year, he said.

Earlier, the government had allocated Tk 60.26 billion from its own resources for completing the target works of the Tk287.93 billion Padma Bridge in the current (FY2018) ADP.

The government had taken the Padma Multipurpose Bridge Construction Project as a top-priority one to complete it before the national elections in December this year.

"The government is trying to build the Padma Bridge. In the last FY2016 the Division performed better as it sought higher funds in the revised ADP. But the lower fund requirement in the subsequent two fiscals is likely to delay the construction further," said the PC official.

The PC has already started work to prepare the ADP for the next FY2019 to streamline the execution of the development projects.

The BBA, the project-executing agency, had spent 48 per cent until February this FY2018 from its total Tk 287.93 billion worth of allocation for constructing the Padma Bridge, officials said.

The government also hired another Chinese company, Sinohydro, last year for the river-training works under the Padma Bridge project.

Besides, the government appointed Bangladeshi firm Abdul Monem Ltd and its joint-venture Malaysian company for building the approach roads on both sides of the Padma Bridge.

After a rough ride over a bumpy road since approval of the Tk 205.07 billion Padma Bridge project in 2009, it is now set to build the largest bridge of the country at Mawa-Janjira point.

The government claims the Padma bridge, when commissioned, will boost the country's GDP by as much as 1.2 per cent.