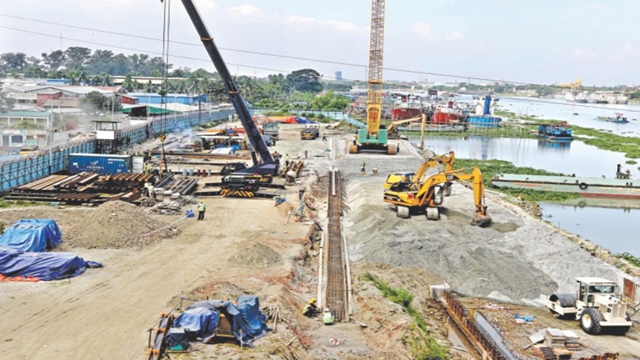 The government is planning to construct the third metro rail (MRT line-5) connecting Hemayetpur and Vatara through the Dhaka Cantonment.

The metro rail will have two elevated parts – the first one to be constructed between Hemayetpur and Aminbazar (5.5km) while the second part will connect Natun Bazar and Vatara (0.5km).

Besides, the 13.6km long underground part will be constructed between Gabtoli and Gulshan-2 via Dar-Us-Salam, Mirpur-1, Mirpur-10, Mirpur-14, Kochukhet, cantonment and Banani.

This means parts of the proposed metro rail will have a 1.6km underground tunnel through the cantonment.

Senior officials of the Dhaka Transport Coordination Authority (DTCA) and Bangladesh Army have held several meetings. DTCA officials say the Army has not opposed the proposal.

The DTCA says it is confident that the Army will allow the underground tunnel to pass through the cantonment. It is a stark contrast to the Air Force’s opposition to the MRT line-6 that was initially designed to pass by the old Tejgaon Airport arguing that it would create operational problems.

It had forced the DTCA to redesign the route to pass by the Parliament. However, environment activists protested against the new proposed route saying it would ruin the Parliament’s original design.

Syed Ahmed, the DTCA executive director, said: “We have already held several meetings with the Army and hope to finalize the design of the MRT line-5 soon. But the army says it will not allow any metro rail station inside the cantonment.”

But he said they were yet to receive an official confirmation from the army, who are scrutinizing the details.

Experts say the metro rail project will face troubles during construction of the underground tunnel at the cantonment, Banani and Gulshan as these are very busy areas.

DTCA’s Syed said there was nothing to worry about.

“Latest technologies can help us construct the tunnel without disruption the existing infrastructures in the alignment area,” he said to media.

“We are prepared to do the underground work without making changes above the land in the cantonment,” he said. “If needed, we will construct the tunnel 50 metres under the ground.”

Urban and regional planning department’s Prof Sarwar Jahan also said that it would be possible if the Tunnel Boring Machine is used.

“Only then, it will be possible to build the underground metro rail tunnel in the cantonment without disrupting the existing infrastructure,” he added but noted that the TBM was very expensive and could push up the project cost.

However, the government is yet to decide on a method for constructing the underground metro rail.

The total length of the third metro rail is 19.6 kilometres and the estimated cost is Tk35,000 crore.

The Japan International Cooperative Agency (JICA) is doing feasibility study under the supervision of DTCA, which will be completed within this year, as per the deal.

However, the DTCA’s Syed said that JICA was working on the feasibility study and detail design of the third metro rail, MRT line-5, and hoped that it would be completed very soon.

“Then we will sign a deal with JICA and Asian Development Bank for funding,” he added.

According to the plan, the second metro rail will be built by 2025 to ease traffic.

The planned second metro rail (MRT line-1) between Dhaka airport and Kamalapur will be the first underground rail network in Bangladesh.

Parts of line 1 will be above ground. It will connect Purbachal Kanchan Bridge and Khilkhet point of the Dhaka airport with the Kamalapur alignment.

It will cost Tk39,000 crores to construct the 26.6-kilometre second metro rail.

The first part of the project will construct 16.4 kilometres underground tunnel from Dhaka airport to Kamlapur via Khilkhet, Kuril, Jamuna Future Park, Badda, Rampura-Malibagh, and Rajarbagh.

The Japan International Cooperative Agency (JICA) is conducting feasibility study under the supervision of Dhaka Transport Coordination Authority (DTCA) which will be completed by this year as per the deal.

According to the DTCA plan, JICA will also complete detail design by this time.

The DTCA has signed a Minutes of Discussion (MoD) with JICA in March 2016 to complete feasibility study and detail design by December 2018 with a cost of Tk4,736 crore.

The JICA has already drafted the alignment of second metro rail and third metro rail under the “preparatory study on Dhaka Mass Rapid Transit Development Project (MRT line-1 and line-5).”

“(JICA) has also agreed to fund the project with 0.01% interest payable over a period of 40 years,” a DTCA official said.

However, the project will likely face trouble during construction of underground tunnels at Badda, Rampura, Mouchak, Malibagh and Rajarbagh because construction works of two overpasses and a flyover are currently going on there.

Also, Dhaka’s underground utility service is chaotic. This will pose a major challenge during the tunnel’s construction. It will also increase the construction costs.

Prof Jahan said that the flyover should have been built after constructing the underground metro rail which was undertaken in 2006. It would have saved a huge sum of money, he added.

The government is yet to decide on a method for constructing the underground metro rail.

According to the plan, the second metro rail will be built by 2025 to ease traffic.