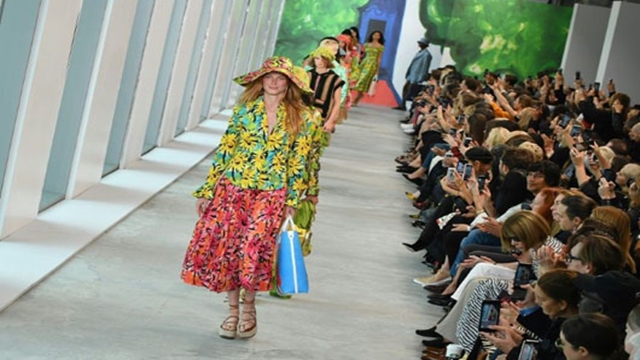 Marc Jacobs, the darling of American high fashion, kept fashionistas kicking their heels Wednesday, before bringing the house down 90 minutes late with a dexterous display of 1950s glamor, pastels and ruffles.

Jacobs returned to the Park Avenue Armory, where his models sashayed down an extra long glass runway, between transparent chairs.

His spring 2019 collection had a 1950s and 1960s feel, all pastels, glamor, puffy dresses but the long delay infuriated guests, some of whom upped and left before the show began. The designer appeared only fleetingly at the end, for the most perfunctory of bows. 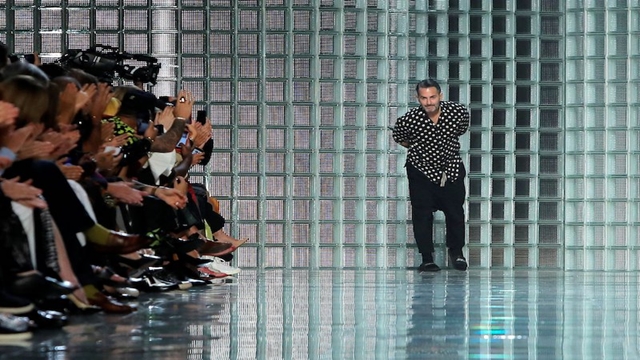 Elle magazine reported that 37 models in the show opted to have their real hair bleached then dyed in an array of pinks, blues, greens and peaches to color coordinate their dresses with their frocks.

“Marc didn’t want a ‘fun’ pastel, he wanted it to have history and for it to look a little vintage,” Redken Global Color Creative Director Josh Wood was quoted as saying backstage by the magazine.

Hair stylist Guido Palau said the looks, which included a high, swinging pony-tail, were a nod to women such as Barbra Streisand and to celebrate a time when women made an effort to always look polished.

“A ‘finished’ woman is something Marc really wanted to emphasize again. She had been to the salon. It’s a very coiffed look,” Palau told Elle.

If there was one word for the Marc Jacobs evening dress it was ruffles and flounces, adorning the throat, shoulders and skirts of frocks that were so voluminous they had a movement of their own, made genteel and lady-like with little pastel-colored handbags and dainty heels.

There was more power suiting, hats with netting and plenty of the bang on color trend of the season — bright yellow and pale lemon. There were also 1980s-style big boxy jackets and a dash of metallics.

The final day of New York Fashion Week kicked off earlier with Michael Kors with A-listers Nicole Kidman and Catherine Zeta-Jones front row for a happy collection inspired by the beach.

The 59-year-old designer created a set of bright, colorful art panels by Australian-born, Brooklyn-based artist Christina Zimpel that evoked the Caribbean or Mediterranean, a stark contrast to misty views of the Brooklyn Bridge through the windows of New York’s sprawling Pier17.

“Global getaway,” “Sunny Side Up” and “From me to you — spread the joy” was how the billionaire Kors summed up the upbeat celebration of color that is bang on the happiness trend for spring 2019.

The catwalk was a riot of print and color, from turquoise to watermelon, persimmon and lemon, to floppy floral hats, a fringed lime green skirt and metallic green pant suit with matching bag.

Pants came in all styles, but most striking were floral and broderie anglaise flares with enormous bell bottoms. For evening, dresses were cut for the beach but designed for soiree in metallics.

Kors put fringes on jackets, skirts, pants and shoulder bags, a trend this season also on display at Longchamp and Coach. 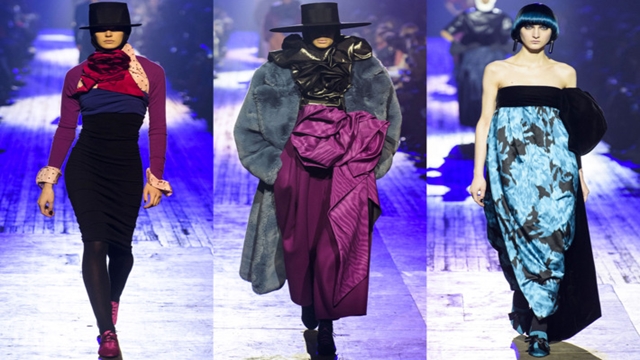 The Rastafarian look made an appearance, as did pale denim, chunky beach bags, and huge platform sandals, with Kors staying true to his recent M.O of including curve models on the runway.

Joining Zeta-Jones on the front row was 15-year-old daughter Carys, who is reportedly keen to follow parents — dad is Michael Douglas — into the acting business.

The soundtrack was beach-baresque with Peter Allen singing “I go to Rio,” The Beach Boys singing “Good Vibrations” and snatches of Serge Gainsbourg and Jane Birkin with “Je t’aime… moi non plus.”

Still to come Wednesday is Barbadian superstar Rihanna, who closes out the week with a Savage x Fenty bash to baptize her brand-new lingerie line — an honor customarily the preserve of Jacobs.

The spring 2019 season will then shift to Europe.