This is my second innings: Obaidul Quader 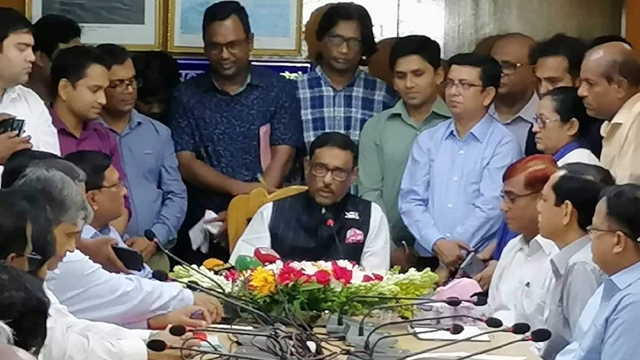 Joining office four days after his return from Singapore, Road Transport Minister Obaidul Quader on Sunday said he is starting the second innings of his life.

“Now, the major challenges are - reducing traffic jam, bringing back discipline on roads and implementing mega projects on time,” he told reporters.

He received a warm welcome at the Secretariat. He started working around 10am and signed some files before meeting senior officials in the conference room.

Quader said that the Eid-ul-Fitr journey will be more comfortable this time. Prime Minister will inaugurate second Gumti and second Meghna bridges on Dhaka-Chattogram Highway through video conference on May 25.

Eid special services of Bangladesh Road Transport Corporation will begin on May 27 and continue until June 10. A total 1,089 special buses will be operated. Besides, for emergency cases, 50 buses will be kept stand by.

Replying to a question about council, he said that a team is working following the direction of Prime Minister Sheikh Hasina. “It’ll be held on time,” Quader said.

The minister said that he would be able to work at full speed after a one and half month. Doctors have advised him to avoid excessive works during this period. He said that he would need to go to Singapore on July 16 for checkup.

He had been admitted to Bangabandhu Sheikh Mujib Medical University on March 3 following breathing complications. Tests revealed three blockages in his coronary artery. He was then flown to Singapore the next day for treatment.

He underwent a bypass surgery in Singapore on March 20.