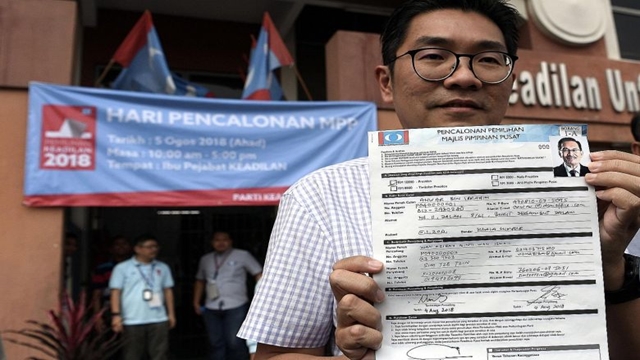 Malaysian politician Anwar Ibrahim won the presidency of Parti Keadilan Rakyat (PKR) uncontested at the close of nominations for party polls yesterday, marking the next step in his journey to become prime minister in two years' time as agreed by the ruling Pakatan Harapan (PH) coalition.

Datuk Seri Anwar will take over as party president from his wife and Deputy Prime Minister Wan Azizah Wan Ismail, who has helmed PKR since it was founded in 1999.

He will still need to run in a by-election and be elected a member of Parliament (MP) before being appointed premier in place of Tun Dr Mahathir Mohamad.

Earlier speculation that Economic Affairs Minister Mohamed Azmin Ali would go for broke and challenge Mr Anwar for the top party post did not materialise.

Instead, all eyes will be on the heated race for deputy president, with Datuk Seri Mohamed Azmin defending his post against maverick PKR vice-president Rafizi Ramli, seen as an ally of Mr Anwar.

The looming internal polls - set to begin in September and run for nine weeks, according to The Star - have already seen PKR's two factions drawing battle lines publicly.

"It would be a baptism of fire to see if the party can remain intact after a bitter contest," said Penang Institute political scientist Wong Chin Huat.

One PKR power centre is headed by Mr Anwar and his family along with Mr Rafizi.

An Azmin victory will mean that the rising star in Malaysian politics will become the party's highest ranking official in Cabinet, as Dr Wan Azizah is not contesting in the PKR polls.

Parti Keadilan Rakyat (PKR) vice-president Rafizi Ramli (above) is challenging Datuk Seri Azmin Ali for the PKR deputy president post.
Related Story Fighting to be Anwar's deputy: The Star columnist Meanwhile a win for former Pandan MP Rafizi will vindicate his claims that Invoke, the research unit he set up to provide strategic intelligence to PH, was a crucial factor in the coalition's shock success at the May 9 general election.

Several leaders standing in the party polls have opted to stay neutral and not take sides.

Lembah Pantai MP Fahmi Fadzil - who is running for a seat on the party's central leadership council - said he has not chosen to be part of either faction.

"Maybe there is a benefit for him, but I have no team," Mr Fahmi was quoted as saying by news site Malaysiakini, when asked to comment on Mr Rafizi's move to unveil a full team of leaders backing his bid to become deputy president.

Nominations were submitted yesterday for the party's key leadership positions, including that of president, deputy president, four vice-presidents and 20 spots in the central leadership council.