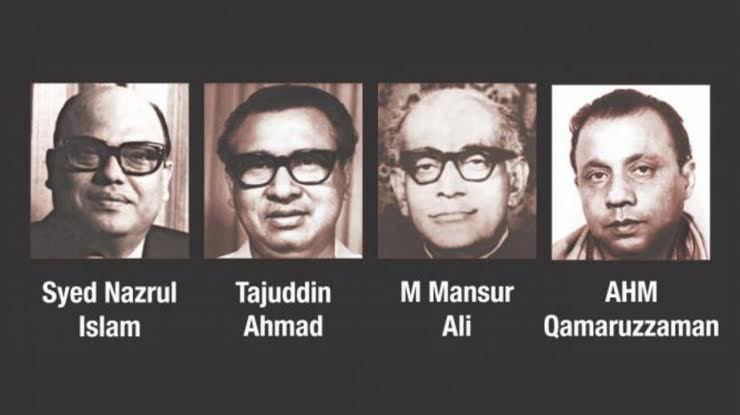 The killing of the four national leaders inside the jail is the second most disgraceful event in the country’s history after the assassination of Father of the Nation Bangabandhu Sheikh Mujibur Rahman and his family members on August 15 in 1975.

The four leaders played a vital role in forming Bangladesh’s first government (Mujibnagar government) which led the country’s war of independence in 1971.

Tajuddin Ahmed was the Prime Minister of Mujibnagar government while Syed Nazrul Islam was the acting President, Mansur Ali was the finance minister and AHM Qamaruzzaman was the home, relief and rehabilitation affairs minister.

Dhaka Central Jail has been shifted to Keraniganj on the outskirts of the capital.

The cells of the old central jail on Nazimuddin road have been turned into museums. Belongings of the four leaders have been preserved there.

Murals of the four national leaders were also set up on the premises of the jail.

Different political parties, including the ruling Awami League, will observe the day across the country following the health guidelines due to the coronavirus pandemic.

“I am recalling them with profound respect,” he added.

The president said when Bangabandhu was in Pakistan jail during the Liberation War, the four national leaders made outstanding contributions to the formation of the Mujibnagar government as they devised war strategy and tactics, carried out administrative activities, conducted the Liberation War, carried on diplomatic efforts and kept an eye on refugees to turn the Liberation War into a people’s war.

“The nation will always remember the contributions of four national leaders with respect,” said the President.

Prime Minister Sheikh Hasina, in her message, termed the Jail Killing Day a stigma in the history of independent Bangladesh and said such killings in the safe custody are unprecedented in the world’s history.

Sheikh Hasina said the killing of the four national leaders were the sequel to the assassination of the Father of the Nation.

Through the hateful killings, the defeated forces of Liberation War and anti-state cliques wanted to erase the name of Awami League from the soil of Bangladesh and to destroy the spirit of Liberation War, she added.

The premier expressed her strong belief that people of the country being imbued with spirit of Liberation War will uphold democracy and rule of law by resisting all conspiracies.

“We will keep continue the trend of the country’s development and progress overcoming all hurdles and disasters,” she said.

The Awami League has begun the day by hoisting the national flag and party flag at half-mast at its central and district offices across the country at 6:00am.

Party leaders placed wreaths at the portrait of Bangabandhu Sheikh Mujibur Rahman at Bangabandhu Memorial Museum in the capital at 7:00am.

They placed wreaths at the graves of Syed Nazrul Islam, Tajuddin Ahmed and Mansur Ali at Banani in the capital at 8:00am while wreaths were placed at Qamaruzzaman’s grave in the northern city of Rajshahi.

The Awami League will also hold a discussion at its central office on Bangabandhu Avenue at 3:30 pm. Prime Minister Sheikh Hasina is scheduled to attend the programme virtually.

Awami League general secretary Obaidul Quader urged all the party leaders and activists to observe the day in a befitting manner.