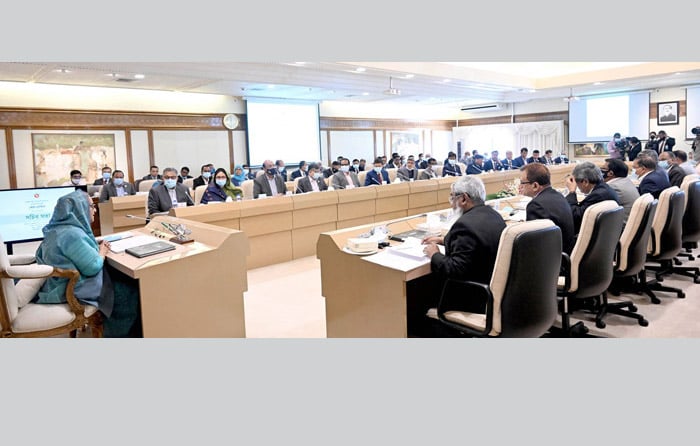 He said from now government employees will not have to provide asset statements separately to the government any more.

Now they will have to provide only the asset statement, which they have to give on a single page during the submission of income tax return, to the Public Administration Ministry, he mentioned.

National Board of Revenue has also no objection in the matter, he said, adding that now circular will be issued to this end.

Anwarul Islam said the prime minister also gave directives to secretaries to keep alert so that terrorists cannot get any shelter or support or any financial advantage by any means.

"You have seen that police detected some terrorists (Ansarullah Bangla Team) in Chattogram Hill Tracts and some of them have also been arrested and others managed to flee," he said.

The cabinet secretary said the premier also gave various directives about what to do in the context of current global economic situation.

He said IMF has informed that the world will go through a tough situation in 2023. During the period, dollar rate will go up, he said.

Russia-Ukraine conflict began just after the end of Coronavirus pandemic, he said, adding that so, secretaries will have to remain alert to keep project cost rational.

The cabinet secretary said fuel, fertilizer and food security should be given top priority and import of less important goods should be decreased.

Cost should be cut through stopping import of cosmetics, apple, grapes and other luxury items, he said.

Feasibility study and assessment should be done properly and current situation should also be considered for taking up any project, he said.

The cabinet secretary said directives have been given to keep alert about projects taken on foreign assistance. Development budget is not reduced but revenue budget has been curtailed, he said.

The prime minister has given special directives to the secretaries to increase agricultural productions, he said.

New varieties of livestock and fisheries have been invented, the cabinet secretary said, adding that directives have been given as such livestock are reared and fishes are cultivated in government lands to reduce import cost.

Directives were given to take necessary measures to increase remittance inflow, he said.

The premier also asked the secretaries to take measures to keep prices of essentials at tolerable level and ensure e-registration of lands and good governance.

A total of 17 secretaries addressed the meeting, the cabinet secretary said.