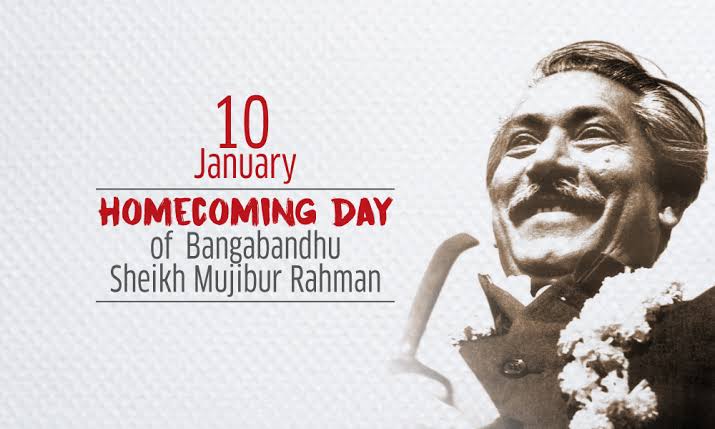 The historic Homecoming Day of Father of the Nation Bangabandhu Sheikh Mujibur Rahman is being celebrated across the country today.

This day in 1972, Bangabandhu, the supreme commander of the country’s Liberation War, returned to independent Bangladesh after his release from confinement for nine and a half months in Pakistan.

Bangabandhu proclaimed independence of Bangladesh in the wee hours of March 26 and called upon the people from all walks of life to participate in the war of independence.

Soon after the proclamation of independence, Pakistani military junta arrested Bangabandhu from his Dhanmondi residence in Dhaka and cracked down on the unarmed bengalis.

The Pakistan military government sent Bangabandhu to West Pakistan and detained him in a prison there.

Bangabandhu was subjected to inhuman torture in the Pakistan jail where he had been counting moments for the execution of his death sentence that was pronounced in a farcical trial.

Following his release, Bangabandhu flew to London, where he met then British Prime Minister Edward Heath and addressed the international media there.
“I was a prisoner in the condemned cell awaiting hanging. From the day I went into jail, I didn’t know whether I was to live or not. I was mentally ready to die. But I knew Bangladesh would be liberated,” Bangabandhu spoke emotionally about his ordeal in Pakistani prison at a news conference in London.

On the Pakistani army’s slaughter of Bengalis, “Mujib declared, “If Hitler could have been alive today, he would be ashamed.”

Bangabandhu flew to Dhaka on January 10, 1972 after a brief stopover in Delhi.

He was given a reception by then Indian President VV Giri and Prime Minister Indira Gandhi, council of ministers, chiefs of three services and other dignitaries and common people.

On his return home, tens of thousands of people standing on the road from the airport to Racecourse Maidan (now Suhrawardy Udyan) greeted Bangabandhu.

Bangabandhu addressed a huge gathering of people that turned into a human sea at the historic ground where the Pakistani occupation forces surrendered to the allied force.

He recalled with respect the contribution of all during the war and urged the people to rebuild the war-ravaged country.

Bangabandhu took oath of office as the country’s Prime Minister on January 12, 1972.

Marking the day, the ruling Awami League, its front organisations and several socio-cultural organisations have taken up elaborate programmes.

The AL daylong celebrations have begun with hoisting of the national and party flags at its offices and Bangabandhu Bhaban at Dhanmondi at 6:30am.

AL leaders and activists placed wreaths at the portrait of Bangabandhu at Dhanmondi 32 in the capital at 9:00am.

Besides, the party will also hold a discussion meeting at 3:30 pm at its central office on Bangabandhu Avenue in the capital.

Awami League president and Prime Minister Sheikh Hasina is scheduled to address the meeting virtually from her official residence Ganabhaban.

The Homecoming Day of Bangabandhu this year came with an extra significance as it coincided with Father of the Nation’s birth centenary celebrations and upcoming golden jubilee celebrations of the country’s independence.

All programmes marking the day this year will be observed maintaining health guidelines in face of the global pandemic coronavirus (COVID-19).

Bangladesh Army arranges Bangabandhu Sheikh Mujib Dhaka Marathon 2021 today as part of ‘Mujib Barsha’ celebrations and to commemorate the homecoming day of the father of the nation.

Besides, newspapers published special supplements while radios and televisions will air special programmes highlighting the significance of the day.

In his message, President Md Abdul Hamid has called upon the countrymen to make relentless efforts in building the ‘Sonar Bangla’ as dreamt by Father of Nation Bangabandhu Sheikh Mujibur Rahman.

Paying profound homage to Bangabandhu, the President said: “Though we achieved ultimate victory on December 16 in 1971 through armed struggle but the true essence of victory came into being upon the Father of the Nation’s return home”.

Bangabandhu declared independence in the early hours of March 26 and called upon the countrymen to take part in the war of liberation and continue fighting until the final victory is achieved, he added.

In absence of Bangabandhu, the liberation war was being carried out under his leadership and on December 16, 1971 the Bangali nation achieved ultimate victory, he said.

Stepping into the soil of newly independent Bangladesh on January 10 in 1972, Bangabandhu was overwhelmed by feelings of emotion, the President said.

In her message, Prime Minister Sheikh Hasina expressed her firm determination of building a non-communal, hunger-free and prosperous Bangladesh as dreamt by Father of the Nation Bangabandhu Sheikh Mujibur Rahman with collective efforts.

“The Father of the Nation dreamt of building a non-communal, hunger-free and prosperous Bangladesh, resisting all imminent conspiracies and inspired by the spirit of the Great Liberation War. We will fulfill that dream with unity, In-sha Allah,” she said.

The premier said in absence of this great leader, there was an imperfection in the ecstasy and excitement of the final victory in the Liberation War, just as his assumption to the stewardship in the reconstruction of the newly independent war-ravaged country was much awaited in the universal perception.

“So, on January 10, the people of Bangladesh felt the true taste of ultimate victory when they got back their beloved leader,” she said.